You are using an outdated browser. Please upgrade your browser to improve your experience and security. For the best experience, kindly use Chrome, Microsoft Edge or Mozilla Firefox browsers.

Get the latest news 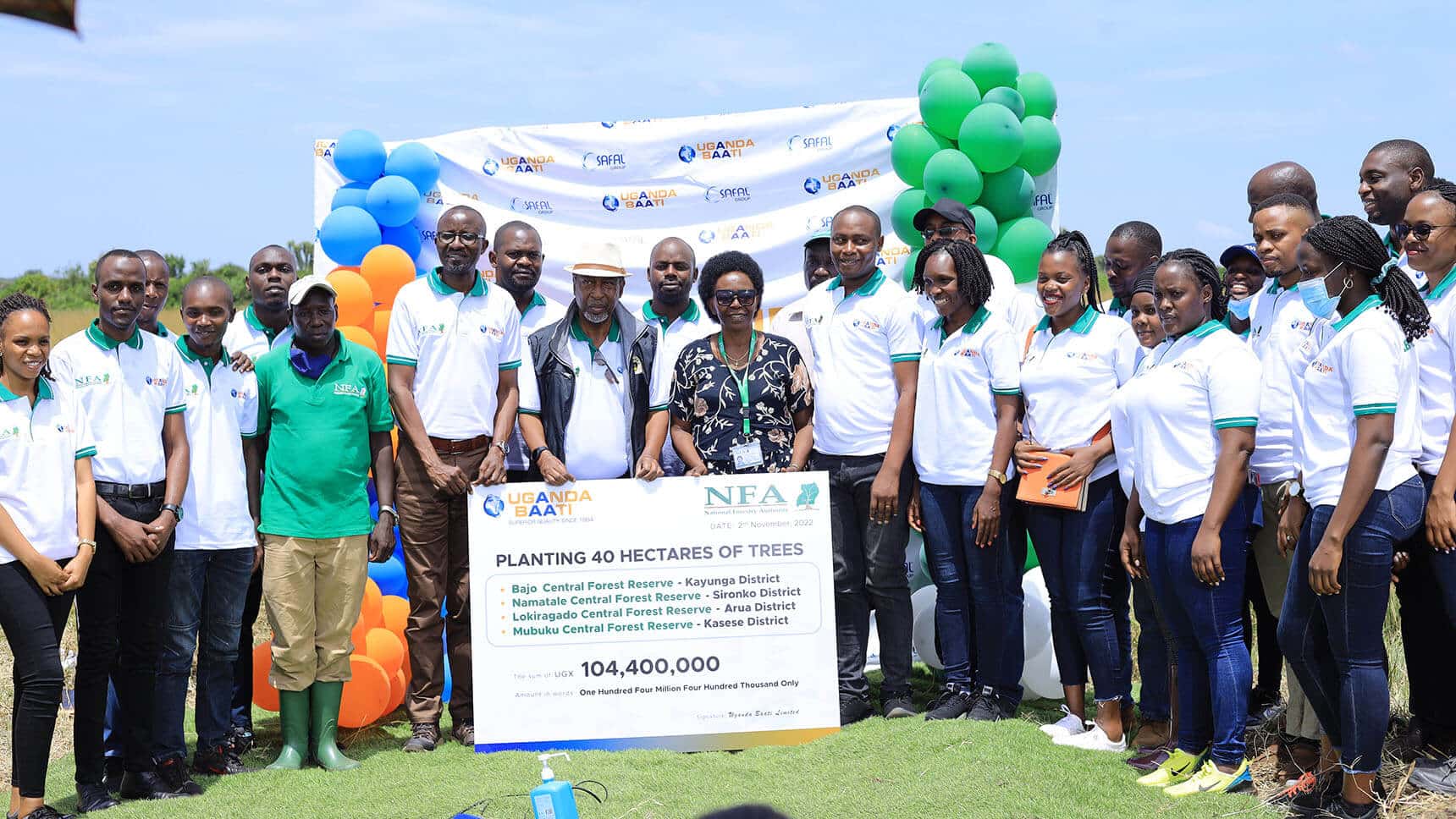 UGANDA BAATI LIMITED PARTNERS WITH THE GOVERNMENT OF UGANDA’S NATIONAL FORESTRY AUTHORITY TO PLANT 40 HECTARES OF TREES, UNDER EVERY TREE COUNTS CAMPAIGN

Uganda Baati Limited (UBL), a member of the Safal Group of Companies and Africa’s pioneer manufacturer of building solutions, has signed an MOU with the Government of Uganda’s National Forestry Authority (NFA) to replant 40 hectares of indigenous trees across the country to culminate to 10 hectares per region (Central, East, West and North). In the areas of Bajo Central Forest Reserve – Kayunga District, Namatale Central Forest Reserve

The launch of this partnership was witnessed today with a tree planting exercise at Bajo Forest Reserve in Kayunga district that will restore the first ten hectares of forest cover. UBL and NFA employees and the local community through local administration participated in the exercise.

Current statistics by NFA show that the country is likely to lose all of its forests in the next 25 years. The repercussions of these actions are clear to see. Besides the landscape almost being completely devoid of trees, the dry season has become longer and filled with more droughts. The loose soil has caused heavy rainfall to turn into deadly floods, while crops are producing less and less yield.

“In the 1900s, the forest cover was 53%, but by 1990, it had reduced to 24%; by 2017, it was at 12% and between 1990 and 2017, Uganda had lost over 2.4 million hectares of forest cover. In 2019, there was a slight recovery in forest cover to 13% and the collaboration between Uganda Baati and NFA under the corporate forest restoration initiative, is a step in the right direction, we thank the leadership of SAFAL group and Uganda Baati for the continued partnership to combat climate change” said Tom Obong Okello, Executive Director-NFA

In addition, UBL also recently collaborated with Uganda Hockey in the score a tree campaign where a tree is planted for each goal scored throughout the season. NFA has identified 5 hectares within Mabira Forest where this partnership shall focus its restoration activities this year.

“As UBL, we deeply care about the people and communities we operate in and live by the values of being a responsible and involved corporate citizen. The Company is guided by four key focus social investment pillars that include: Environment, Shelter, Health and Education. Today’s event falls under the Environment pillar and this initiative will contribute to the realization of the Sustainable Development Goals (SDGs) specifically SDG 13 (Climate Change) and SDG 17 (Partnerships),” said George Arodi, Business Head, Uganda Baati Limited

In addition, the Uganda Baati Board Chairman, Dr Alan Shonubi, emphasized the company’s commitment to lead the way in reducing the impact of climate change, “We believe that environmental protection is the only way we can safeguard our future. The situation will get worse if we do nothing. But we can do something about it before it too late”. Dr Alan Shonubi added.

Uganda Baati Limited is a member of the Safal Group which is the largest steel roofing company in Africa. Founded in 1964, Uganda Baati was the first company in the East African region to set up an ultra-modern Continuous Galvanizing line. With branches in Tororo and Arua, and with 10 Showrooms across the country, Uganda Baati is the country’s leading manufacturer and supplier of roofing sheets and allied building products. End

Uganda Revenue Authority, pays a courtesy call on Uganda Baati Limited and commits to continue the partnership in developing Uganda